In summer 2011 I built a 2 x 4 box, filled it with dirt, and grew some stuff. I won't grow edible things in my yard, out of caution against lead and chemicals in the soil of this old uptown neighborhood. I raised Japanese eggplant, okra, and purple-hulled peas. Maybe some squash. I can't recall. We fried the eggplant, and cooked a few pots of peas with okra added for flavor and color. I then tried a winter crop of Brussels sprouts and greens, and nothing did well. We never got enough of a cold spell.

Last summer, I refreshed the box with new garden soil and nothing grew well. The new dirt was too dense. I needed lighter, airier soil. I came up with Happy Frog Potting Soil, from Fox Farm Fertilizer Co. and found it at Laughing Buddha Nursery on Clearview. I'm sure there are other mixes that would do just as well, but I like the sound of "Embrace the Vitality of Happy Frog," and the mix looked good for vegetables. At Charvet's across the street, I found an all-purpose fertilizer. All in all, hunting down dirt, fertilizer, Japanese eggplant seedlings and other other good stuff to grow took me a couple of days of driving around the Metrys to Laughing Buddha, Charvet's, Lowe's, and Jefferson Feed and Seed. Charvet's, by the way, is totally witchy - if you're looking for healing herbs like fever few, mother's wort, penny royal and so on, go to Charvet's.

I have about 16 square feet to work with - a 2 x 4 box, a 2 x 2 box, and an oval fish pond roughly 2 x 4, with a deep and a shallow section. I also have some green plastic growing bags. Happy Frog is expensive - $18 for two cubic feet! - so I removed just 4 inches of the garden soil and spread two bags of the Frog as top soil. So far I'm happy; it's loose, dark, and all the plants settled in overnight, except the okra. It wasn't draining well and looked like it might be coming down with a fungus.

In the alley I have three green bags, two seeded with cow peas (like field peas) and one with sugar snaps. I've put some branches in there for the sprouts to climb.


While I was at Laughing Buddha Nursery, I picked up some herbs, along with an idea: 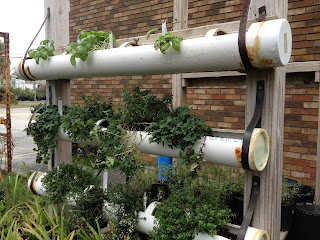 I mangled a 10-foot length of 4-inch sewer PVC into 3-foot segments with a handsaw I pulled off the shelf at Home Depot - those big box stores used to have stations set up for cutting pipe, didn't they? At home I hacked trenches with a little cordless saw, drilled drainage holes, sealed the end caps to the uneven cuts with silicone glue, and made a few passes with a can of spray paint. Voila: 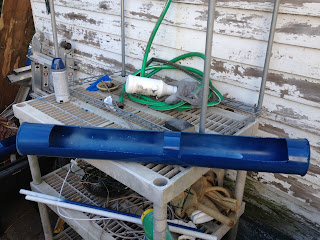 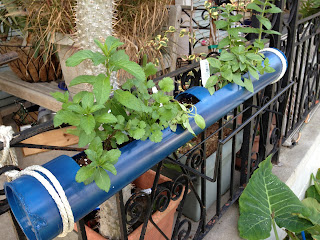 I made two, filling one with mints and basils, and one with savory herbs. They're rough around the edges, but were fun to make and fit perfectly along the front porch rails.

These pictures are from the last week of March, right after planting. Everything is taller already, especially with the bit of rain we've had. The fertilizer and soil seem to be good, so far.

But it could all go to hell. Summer heat hasn't even nearly begun.
Posted by Beth at Friday, April 05, 2013 No comments: