Waitress in a Donut Shop 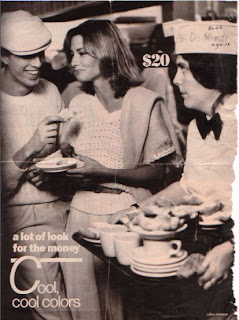 Back in the late seventies, I worked at Cafe du Monde, slinging beignets to tourists.

Here's a beignet at Cafe du Monde - pronounced ben-yay (emphasize either syllable, we'll know what to serve you.) Tourist attempts on that ranged from bengays to big nuts to bayonets.

Above is a picture of me in 1976. One day, Madamoiselle magazine did a photo shoot at CDM. We kept trying to slip the models beignets - they were so skinny!

I remember being annoyed with them being in my way all day, and this picture captures that. I don't know why that's the one they chose to publish. There's a little note "Beth age 16" in my mom's handwriting at the top, on my paper hat.
Posted by Beth at Thursday, January 07, 2010 4 comments: